For most of us, since the election of 2016, we start each day with fear, an almost out-of-body experience predicated on “What else can go wrong?” We stare our screens in horror as each day brings more bad news than the day before. Our body politic is unwell, we are unable to have a civil dialogue, to disagree. We are being further divided by trolls on the internet. As author Michiko Kakutani writes in her new book, The Death of Truth describes our contemporary civic life as “as people locked in their partisan silos and filter bubbles, are losing a sense of shared reality and the ability to communicate across social and sectarian lines’. As educators who have taught 1984  and Animal Farm to countless students, we are even more keenly aware of danger flags that make people susceptible to lies, misinformation, and further divide.

The Washington Post estimates that our president lies on average about 9 times a day.  In these times when truth depends on your filter bubble, it is more important than ever that we teach our students to be critical thinkers. As we look ahead to the new school year ahead of us, the imperative to furnish our students with media literacy skills is stronger than ever. Our students need us to help them gain the skills to analyze, evaluate, and critically examine endless amounts of information that can be easily accessed through the phone in their pocket. If we fail to seize this moment for critical thought, and guarding against anti-intellectualism sentiment that is strong in our country, then we fail our students. We fail them in becoming sharp, independent thinkers who are engaged in the work of caring for the world.

From flat-earthers, anti-vaxxers, to armies of faithful ones committed to gospel according to InfoWars, or Breitbart, there are endless examples of lack of understanding of science or inability to adhere to logic creates waves of misinformation that pull others in its tides. Here are two examples to share with students if you want to begin a dialogue about “Fake News” and the peril of forgoing doing one’s own research and fact-checking.

The first example comes from NFL team Seattle Seahawks, when the defensive end for the team Michael Bennett was accused of burning the American flag, while the coach Pete Caroll looked on with glee. The image was photoshopped, yet some chose to believe the lies that a flag burning took place in their locker-room. The  two images are included below for you to share with your students. You can also ask students to identify other examples of “Fake News” that spread via a social network but were later debunked. 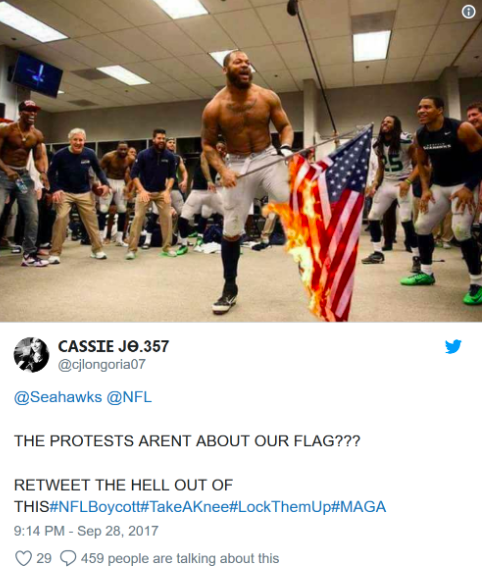 The next example comes from India. In India, nearly 13.7 Billion WhatsApps messages are sent everyday. With cost of smart phones falling and data becoming cheaper, it has become a hub where the second most populated country gathers and chats. During the election cycle it is normal for a typical person to receive 1000 WhatsApp messages encouraging them to cast a vote for a specific candidate or party. When the largest democracy relies on learning about candidates in this way, things can go wrong very quickly as they did in the recent election cycle. The New York Times recently reported that, “Right-wing Hindu groups employed WhatsApp to spread a grisly video that was described as an attack on a Hindu woman by a Muslim mob but was in fact a lynching in Guatemala.”

The work of teaching young people to be independent and critical thinkers is not small or easy, but it is the work of our present times.

How do we begin this work of Media Literacy? Here are some examples and places to begin:

Let me know your thoughts on this post and please share your resources for teaching media literacy in the comments below.

Meenoo Rami, author of Thrive, is a national board certified teacher who taught students English in Philadelphia for ten years, at the Science Leadership Academy and in other public schools in the city. The founder of #engchat, an international Twitter chat for English teachers, Meenoo is a teacher-consultant for the National Writing Project and an instructor in Arcadia University’s Connected Learning Certificate Program. Meenoo has also served as a teaching fellow with the Bill and Melinda Gates Foundation, where she led the portfolio to help teachers refine their practice through collaboration. Currently, Meenoo works as Manager for Minecraft Education at Microsoft where she helps educators, districts, and organizations reimagine game-based learning for classroom practice. Follow Meenoo on Twitter @meenoorami.